UPDATED: Added Thrift to the comparison.

So, I totally botched the 0.4 release announcement yesterday. I was excited about promise pipelining, but I wasn’t sure how to describe it in headline form. I decided to be a bit silly and call it “time travel”, tongue-in-cheek. My hope was that people would then be curious, read the docs, find out that this is actually a really cool feature, and start doing stuff with it.

Unfortunately, my post only contained a link to the full explanation and then confusingly followed the “time travel” section with a separate section describing the fact that I had implemented a promise API in C++. Half the readers clicked through to the documentation and understood. The other half thought I was claiming that promises alone constituted “time travel”, and thought I was ridiculously over-hyping an already-well-known technique. My HN post was subsequently flagged into oblivion.

Let me be clear:

Promises alone are not what I meant by “time travel”! 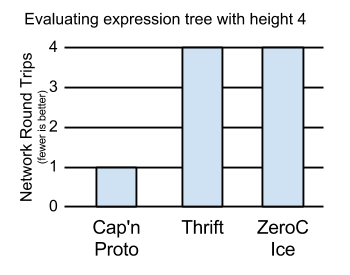 So what did I mean? Perhaps this benchmark will make things clearer. Here, I’ve defined a server that exports a simple four-function calculator interface, with add(), sub(), mult(), and div() calls, each taking two integers and\ returning a result.

You are probably already thinking: That’s a ridiculously bad way to define an RPC interface! You want to have one method eval() that takes an expression tree (or graph, even), otherwise you will have ridiculous latency. But this is exactly the point. With promise pipelining, simple, composable methods work fine.

To prove the point, I’ve implemented servers in Cap’n Proto, Apache Thrift, and ZeroC Ice. I then implemented clients against each one, where the client attempts to evaluate the expression:

All three frameworks support asynchronous calls with a promise/future-like interface, and all of my clients use these interfaces to parallelize calls. However, notice that even with parallelization, it takes four steps to compute the result:

As such, the Thrift and Ice clients take four network round trips. Cap’n Proto, however, takes only one.

Cap’n Proto, you see, sends all six calls from the client to the server at one time. For the latter calls, it simply tells the server to substitute the former calls’ results into the new requests, once those dependency calls finish. Typical RPC systems can only send three calls to start, then must wait for some to finish before it can continue with the remaining calls. Over a high-latency connection, this means they take 4x longer than Cap’n Proto to do their work in this test.

So, does this matter outside of a contrived example case? Yes, it does, because it allows you to write cleaner interfaces with simple, composable methods, rather than monster do-everything-at-once methods. The four-method calculator interface is much simpler than one involving sending an expression graph to the server in one batch. Moreover, pipelining allows you to define object-oriented interfaces where you might otherwise be tempted to settle for singletons. See my extended argument (this is what I was trying to get people to click on yesterday :) ).

Hopefully now it is clearer what I was trying to illustrate with this diagram, and what I meant by “time travel”!